Sibling rivalry is nothing new.

Kids don’t always get along. They have unique personalities and like different things, which poses a problem when they both want to watch TV at the same time.

Kids argue with each other. It’s something all families go through but sometimes, it can get out of hand.

Does it seem like you’re always breaking up a fight between your kids? Has sibling rivalry gotten out of hand? Is the arguing interfering with daily activities or affecting other members of the family?

This is when many parents are faced with the big question, how to combat sibling rivalry without choosing sides. What do you do?

Here are a few tips that may help you out in this situation:

Hold both kids equally responsible for their behavior

If you send one child to their room for 10 minutes to calm down, send them both. Take away computer or video game time from both kids. By holding everyone involved in the incident equally accountable, they’ll soon learn most things are not worth arguing over.

Be sure everyone in the home knows and understands this rule to be fair.

It’s also important to recognize the different roles each child played in a confrontation. If one child is more of an aggressor, that child should be held responsible for provoking a sibling to the point of argument.

You may have another child that is easily provoked. You’ll want to hold that child responsible for their behavior, as well.

Learning that there will always be people in this world that will actively try to get push their buttons, and that it’s important to not let those people provoke them is equally as important as teaching them not to be the one doing the provoking.

Allow each child a chance to explain

“Right or wrong, they want to be heard and know that someone is really listening.”

Right or wrong, they want to be heard and know that someone is really listening. Respect them enough to give them that opportunity.

It also gives you a chance to learn more about your kids and it will help you evaluate the situation a little better.

This can also be an important life skill for them. Getting in trouble at school or at work means they’ll have to explain their side of the story. They can learn to do this in a mature and effective manner because they have had the chance at home to make their voice heard in a safe environment.

It can also be a deterrent to sibling rivalry. Knowing they will have to explain themselves to a parent may deter them from engaging in confrontation.

Often, the guilty party knows they they are guilty, and having to tell you why they are acting out may just be what keeps them from going down that rabbit hole in the first place.

Don’t let either child be “the winner”

When kids argue, they both believe they are right and the other is wrong. It is their hope that mom and dad will see it their way and declare a winner of the argument.

Even as adults, we want someone to step in and validate our argument.

However, by not allowing either child to feel like they won, there is no reward for the argument. In fact, kids begin to realize it’s a big waste of time and nothing good comes from it.

Teach your kids to negotiate

Negotiating to find a solution to the problem is a very important skill kids need to learn. Supervise your kids as they calmly talk over the situation, compromise with each other and find a solution that is fair to both of them.

You’re there if needed and should intervene when necessary but let them talk it though when possible.

Parents should never choose sides when it comes to sibling rivalry. It only causes more problems between the kids and it can put a strain on your relationship with your children, as well. Use these tips to help stop the fighting without choosing sides. 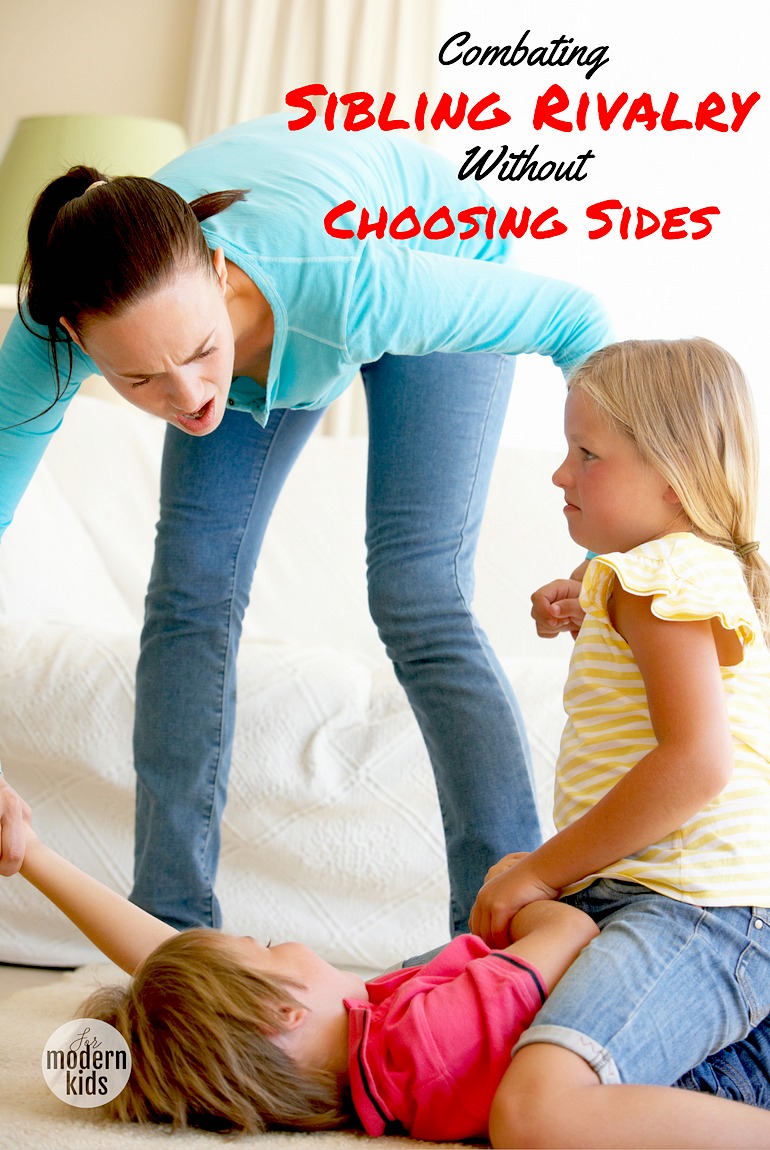 Jennifer is founder and editor of formodernkids.com and mom of four fun-loving kids. Jennifer created For Modern Kids to share her journey through motherhood and provide helpful resources with other moms in the day-to-day grind of breastfeeding, soccer practice and picky eaters.